Reign Of The Seven Spellblades, Vol. 1 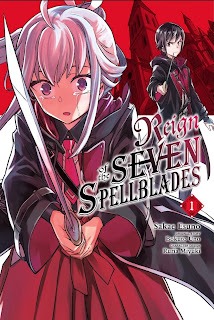 Okay we all know what comes to mind when Americans think of ‘magic boarding school’, right? That’s right: Neil Gaiman’s The Books of Magic, which was about a dark-haired, bespectacled orphan drawn into a world of magical wonder that he’s destined to either save or destroy, and which came out almost a decade before a certain belligerent transphobe’s career took off. (I’m joshing, Gaiman himself said that he “wasn’t the first writer to create a young magician with potential, nor was Rowling the first to send one to school”; She Who Must Not Be Named is a monster that created a Micky Mouse-level property and decided to use that success, power and privilege to hurt people that have no ability to punch back, but she’s not a plagiarist.)
No, of course I mean Hank Ceramicist & The Sudden McGuffin, a thing that was accessible and, to its credit, opened countless young minds to the magic of reading; sadly, it seems they frequently didn’t go on to read much else, but this is the war for literacy in America, and we are prepared to take what we can get and call it a victory. ROTSS takes the by-now thin and threadbare Academy of Adventure genre, makes extremely minimal tweaks, and the result is substantially better and more engaging from the very first chapter. How do you feel about:
Obviously it’s glib and reductive to describe anything as “Property X meets Property Y”, or “Other Property But With This Change”, but it’s a useful shorthand. That said, ROTSS has a lot to offer on its own merits: an intriguing magic system, the seeds of some pretty interesting political drama involving one of the students who’s foreign royalty, the aforementioned samurai clearly having PTSD, and a central mystery involving the titular Seventh Spellblade, terrifyingly powerful magical sword techniques of which there are, we are assured, only six in the world. It lays a LOT of groundwork for storylines to come, eschewing the common (but by no means bad) manga production technique of basically just coming up with something that happens that week. Also, apropos of nothing, their school uniforms are INCREDIBLE Kingdom Hearts-ass robe/hoodie hybrids, and as a renowned slut for a nice coat that definitely tips the scales in the book’s favor for THIS citizen.

Overall, ROTSS, Vol. 1 is a very strong start and found a place on my preorder-on-sight list before the end of the first chapter; I can’t wait to see where it goes and how many teachers it has to fight when it gets there.

Score: 8.5/10 Roast Chickens That Were Supposed To Be For EVERYONE, LITTLE MISS BIG HUNGRY SAMURAI 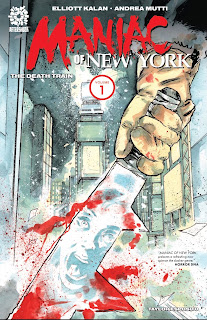 First of all, if you aren’t already familiar with Elliott Kalan, you need to go listen to The Flop House, possibly the paterfamilias of the Bad Movie Review podcast genre, and go read his other comics and children’s books. He’s exactly on my wavelength, being more Dune references, Tom Brokaw impressions and made-up songs than man, but MONY retains his trademark bonkers creativity while letting his senses of wordplay, penchant for Godzilla and borderline inappropriate love for Popeye’s chicken take a break, and the bleak, horrifying result is all the better for it.

It’s New Year’s Eve in Times Square, a crowd (a much more innocent crowd, as seen from our burning Barcaloungers in the present day) is gathered to welcome 2016 into the world. The festivities are cut short, however, by a tall man in a parka and a mask scrawled with red signs, who proceeds to murder 79 revelers with a strange, jagged piece of metal. (Or maybe it’s just a tool I don’t recognize, but it looks like a big fake Dracula fangs to me.) Physical force doesn’t affect him, bullets slow him down but don’t seem to do any damage; all you can do is run, and for many that’s nowhere near enough. New York, meet 2016; New York, meet Harry, the Maniac.
Fast forward to This Tuesday, A.D.: Harry is still very much on the loose, entirely unstoppable by any apparent means and harvesting hundreds of New Yorkers every year, and the city-wide response has been…to include Harry sightings and possible alternate commute routes to avoid him in morning traffic reports alongside the weather and subway delays. I mean sure, he butchered four NYU students in broad daylight in Washington Square Park two weeks ago, but still gotta get to the office amirite, a-ha-ha-ha-ha! 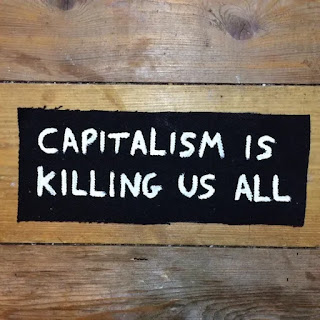 HA. HA. HA. HA. HA. HA.
The Powers That Be have decided that there’s no percentage in trying to stop Harry or figure out what the fuck his deal is, and trying and failing is political suicide, so for the sake of their careers it’s better to just not take the swing. Meanwhile, NYPD Detective Zelda Pettibone and mayoral aide Gina Greene are the last officials devoted to taking his unkillable ass down but have burned the very last of the meager support they were able to wring out of their superiors. They’re the only people left who give a damn about the lives of the citizens of this city and also have any ability to do anything about it, so they high-five, go off the radar, and agree they’re not stopping until Harry’s dead or they are. Godspeed, ladies. And stay out of the subway.

It’s hard not to and not hard to see Harry as a symbol for any number of large, nebulous threats that humanity has felt the tangible, deadly effects of but has opted to just kinda learn to live with instead of making any effort to remedy; climate change is what comes most clearly and immediately to mind, although Covid would certainly also fit in his bloodstained pants, give or take a belt-notch, and general economic inequality and society’s refusal to care for its less fortunate also definitely qualify.
The difference is a reversal of scale that forms a mirrored but identical shape: climate change and capitalistic policies designed to keep the poor miserable and powerless are the result of decisions made at the highest echelons of human politics and business, and the average person has literally no ability to impact them; Harry is a singular force that is (maybe???) nobody’s fault and that nobody at any level can do anything about, and in both cases your boss still doesn’t care why the physical world prevented you from being on time, because society writ large makes no allowance for the fact that your job requires you to take your life in your hands on a daily basis because the alternative is starvation. (Covid falls somewhere in between; there was obviously a definite failure on the part of the American machine to take it seriously enough bEcAuSe tHe eCoNoMy, and just as obviously individual Americans chose to deliberately, knowingly endanger everyone around them because they needed to go to Hawai’i despite the state’s explicit pleas that mainlanders stay away, or visit an elderly relative they’ve ignored for years but need to see right damn now, or attend a fucking Nickelback concert. It’s everybody’s fault, I’m a healthcare worker, don’t fucking @ me.)
I’m not saying Harry is supposed to be any of those, but like any Tarot card, insane conspiracy involving The Democrats or other strong symbol, he can be applied to many situations, give or take a few specifics. (Kalan has been quite open about the fact that the series is at least partially an attempt to give us the carnage and bodycount denied us by Friday the 13th Part VIII: Jason Takes Manhattan, regarded as one of the worst and laziest of the series.) But as all art is self-portraiture and a reflection of its time, the act of being an reader requires that we place ourselves within a work, and it’s only human to look around and find some things familiar, even if they aren’t related to what they remind us of. Harry’s story is ongoing and given the strength of Kalan’s famous pitch for a Ziggy movie will doubtless come to a satisfying conclusion–he knows a man who shows an audience a goddamn amulet and doesn’t do anything with it is a man that makes enemies–but until then, it’s heartening to see Zelda and Gina as ourselves: people who have been abandoned by the systems that are supposed to protect and support them, and who can reasonably expect to do very little on their own, but wake up and try every day to save as many people as they can with anything at their disposal, because to do otherwise, to give up, would be to do Harry’s work for him.
Score: 10/10 Ittybitty Bottles Of Airplane Vodka That Save The Day, At Least For A While
the moment you came to, I swore I would change

Welcome, and bagels be with you, now and always. This is where I write stuff, and put other stuff I make! Enjoy!

These are my biggest public-writing inspirations; check them out, I guarantee you'll be smarter, happier and hungrier for it:

Comic Book Reading Orders
The Great comics Database
How To Love Comics
Go to mobile version
%d bloggers like this: